A devout woman is living with her family in the Jewish cemetery on Jerusalem’s Mount of Olives. During the day, while her husband and children are at school, she is left alone in the mountain. She goes for walks in the cemetery, trying to escape the endless house work.

One night, out of frustration, she storms out of the house climbing the cemetery, running wherever her feet will carry her. To her surprise, she is exposed to an unsettling sexual scene. Stirred by this image, she starts exploring this new realm of the mountain, while trying to keep a normal face during her daytime routine. Until she can’t anymore.

Avraham is a small–time contractor who’s trying to make it into the big–time, and therefor gambles on projects that exceed his capabilities. His family lives in the shadow of his career ambitions, until one of these projects finds him drowning in debts he cannot pay back .
Under the threat of the father’s financial difficulties they rediscover the strength of their family ties. 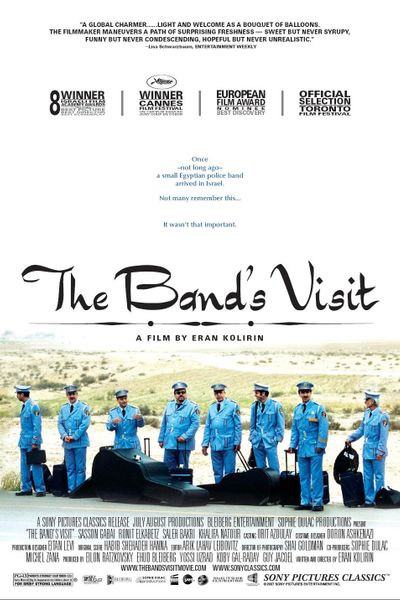 Once, not long ago, a small Egyptian Police band arrived in Israel. They came to play at an initiation ceremony but, due to bureaucracy, bad luck, or for whatever reason, they were left stranded at the airport. They tried to manage on their own, only to find themselves in a desolate, almost forgotten, small Israeli town, somewhere in the heart of the desert.
A lost band in a lost town. Not many people remember this. It wasn’t that important.

According to the tradition, the period of mourning begins after funeral: the complete family goes to the home of the late one, and nobody must leave this place during seven days. One must dedicate oneself to prayer for the soul of the deceased and tell him goodbye. During one week, they are going to sleep together on slim mattresses, to eat a light food, without shaving, taking a shower, or even changing clothes.
The mournes are the six brothers, the two sisters, the spouse and her two children as well as the mother, To these twelve persons are added the brothers wives, and some close friends.

The action takes place during the 1991 Gulf war, and the missiles of Saddam Hussein constitute a permanent threat. The family factory of painting on aluminum, which is their mutual source of income, is at the edge of bankruptcy and debts pile up.

Vis a vis these multiple pressures these << Seven Days>> are going to put to the test family structure. All its members have to unite and show solidarity towards their fellows.
They should mourn their deceased brother and put aside any material worries, but instead of that, ther reject the idea of death and the purpose of their meeting, to leave place to their old demons.

Ilan Ben Natan, a 58-year-old Professor of Astrophysics, is married to the young and lovely Naomi. He is obsessively in love with her, and keeps track of her every move. One day Ilan discovers that his deepest fears have come true. Naomi has a lover. He seeks the advice of his elderly German-born mother, who suggests he leave the matter alone and allow the affair to die out on its own. But Ilan is unable to control himself. He follows his wife and is tortured by what he sees. One day, Ilan goes behind his wife’s back, confronts her lover and commits a horrible act, the consequences of which will weigh heavily on his conscience.

In a small village, Hagar Erlich is somewhat of an alien, unable to find her place in the town community and in her own life as a newlywed. In the ruins of an enchanted, abandoned village she will find her secret hideaway.

Beyond the Mountains and hills

Beyond the Mountains and hills

David is discharged from the army after serving for 27 years. He returns to his family after being distanced from them for years and tries to find himself in his new civilian life. He believes that he will find his way in some managerial position in the private sector, but he has difficulties adapting to the pace of the “new Israel”, a competitive culture obsessed with success and money. More often than not, he finds himself alone at home, watching a morning TV-show or listening to the radio. When a friend suggests working as a salesman, he sees this as an opportunity to get his foot into the door of the business world and make something of himself. But it soon turns out a bitter failure. Also the rest of the family gets deeply into trouble: His daughter tries to overcome boredom and futility by reaching out beyond the mountains and hills, and becomes entangled in an emotional and political mess. His wife, a school teacher, embarks on an affair with one of her students, humiliating herself, and subsequently provoking her son to a violent act of vengeance. Good people living in a bad reality, helplessly caught in the maze of today’s Israel.

It all begins at Sea

It all begins at Sea

The first episode takes place at the seaside. The second unfolds in the Ashkelon National Park, among the ancient statues, trees, and tall stone fortifications. The third takes us into the new home the famili has moved to in anticipation of the birth of a baby girl, sister to the boy. Each of these situations becomes fraught with danger and drama; taken all together they will bind the three family menbers to each other more strongly and more profoundly than before.

Fate play tricks with the Goldsteins, showing them its light and amusing aspect as well as its menacing, severe one.
Three people must face this arbitrary fickleness, if only to understand that they have nothing but one another.

“Chen, a young kid, is battling a cultural conflict between his Russian born mother and Israeli father. She is cultured and used to the finer things in life, including theater and fine dining. He is gruff on the outside but sweet on the inside – a Sabra; and looking to make his young son a man rather than the wimp his mother is raising. One day, Chen stumbles upon a ballroom dance class for young people and sees Natalie, a stunning Russian young girl he falls in love with immediately.

His interest in Natalie leads him to taking ballroom dancing and to ultimately bridging the cultural divide of his own family – through the Cha Cha and the Tango. The teachers are a pair of former Russian world champions who never quite fulfilled their potential, but find themselves battling their demons through the instructions of the kids…”

A man comes at a time of day he’s never been there before. A time when the light hits it differently, when the humming of the fridge is the only audible sound. A man comes home at a time he’s never come home before and for a moment it seems to him like he has walked into the house of a stranger, empty and silent at a desolate mid-day hour. A man comes home and all of a sudden can see fabulous and forgotten things. Dust particles swirling around in a white ray of light. His wife asleep in their bed, her breath rising and falling under the design magazine that rests on her chest. An old price tag glued to the underside of the table.

A man comes home like a tourist and observes anew those things that make up his life. The parking lot, the stairs, the full mailboxes. A man comes home and walks into his life at a time he’s never been inside it, observing it with the eyes of the child he once was. And, once again, it is filled with mystery and magical hideouts. The corridors, the passageways, the boiler rooms.A man stands by and observes his own life from the outside. But is this life Still truly his own?